The partners of the CeViSS – “Cloud enhanced Vehicle intelligent Sensor Sharing” project, today presented its results in Gothenburg and via web-cast.

The project has implemented and tested technology for using vehicle sensors to detect and collect data for specific traffic situations. Data from the sensors was then transmitted in real-time to a Central Traffic Cloud (CTC) where it was analysed and enhanced in order to send better and more precise warnings to connected users. 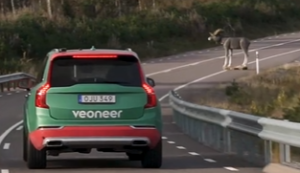 Sensors in Veoneer’s test vehicles were used to detect and identify objects along roads such as large animals, pedestrians and still-standing cars. The observations were sent in real-time to CTC to be matched against other data to determine the risk level. Only observations causing an imminent danger were then sent as warnings to approaching CEVT and Volvo cars (e.g. a moose inside a wildlife fenced road or a pedestrian walking on a motorway). A video snippet recorded by the vehicle cameras was also sent to CTC where an operator could visually confirm the threat. The project also successfully demonstrated how CTC sent instructions to the Veoneer and CEVT test cars such as a recommended speed inside geofences (to be used by the Adaptive Cruise Control (ACC)) and search requests to look for specific symbols or texts.

Tests were also done where the Central Traffic Cloud had direct control of on-board cameras to start sending video when the Veoneer’s test vehicle approached an accident scene. Images or live video from the scene have the potential to give 112 operators and first responders a better understanding of the situation and help dispatch the right resources as well as make a more detailed planning of the rescue operation before arrival.

An important part of the project has been to investigate and point out legal aspects of using sensor data in the way it was tested in the project. The findings will be available in the project final report.

The final report will be available from Drive Sweden web site, www.drivesweden.net as from January 2021.

About Drive Sweden
Drive Sweden is a Strategic Innovation Program launched by the Swedish government that creates future mobility services based on connected, self-driving and shared vehicles. Drive Sweden gathers the best in the area – from all sectors of society. We work closely together to make optimal use of all possibilities, but also to address the challenges that could arise along the way. The Drive Sweden innovation program is funded by the Swedish Energy Agency, the Swedish Research Council Formas and Sweden’s innovation agency VINNOVA. Lindholmen Science Park is the host for the program.