Carmenta Server 4.8 and Carmenta Server Core 2021.0 are the new versions of Carmenta’s web map server products, that together offer support for web map services on a variety of platforms, including Windows Server and container platforms such as Docker Containers.

Both map server products are built on an internally scalable architecture based on the Carmenta Engine map server runtime, providing the very high performance and reliability necessary for mission-critical systems.

Carmenta Server and Carmenta Server Core supports reading of a large number of different data sources on various formats, publishing them as web map services on different standardized protocols, for use as background maps and map overlays in 2D and 3D map clients.

The process of publishing various services for use with Cesium has been significantly enhanced with the new release. It is now possible to publish a collection of different web map services from a single map configuration, including one or more of:

The regular SDK development tools Carmenta Studio and Carmenta Explorer are used to define and preview the map services, before publishing them.

Podman is an open-source daemonless container engine for Linux, which is both CLI and binary-compatible with Docker. It has support for containers run as root or in rootless mode. The above allows users to run containers with higher security and integrity with Podman, while still allowing the same CLI interaction and Kubernetes integration as with Docker.

One of the major benefits of Podman is its support for running containers without full root authority. Carmenta Server Core 2021.0 can be configured to run all its internal processes as unprivileged user accounts without root authority. This increases container isolation and adds a new security layer to minimize the impact of any security breech.

It also allows mounting file volumes in the Carmenta Server Core containers in rootless mode, to further enhance security in the runtime environment.

Carmenta Server and Carmenta Server have a rich support for visualization of different military symbology standards, such as DOD MIL-STD-2525 and NATO App-6. The support for the “D” version of the standards, which were included in the previous versions of the products, supported point symbology. This has now been extended to include tactical graphics as well.

The map bundles are platform independent and may be created on and/or distributed to Windows and Linux file systems, supporting different multi-platform configurations.

The new release focuses on the developer experience, adding more extensive documentation and samples, to help developers getting started producing advanced map configurations. A new RESTful API allows the system administrator to manage web map server settings and the publishing of map services, manually or with script automation. For S-57 nautical charts, the new release also contains improvements in the way tiled nautical charts are published, as well as a simpler handling of S-63 encrypted charts.

Carmenta Server 4.7 and Carmenta Server Core 2020.0 also leverage the new functionality in Carmenta Engine 5.14, including support for the MIL-STD-2525D and NATO APP-6(D) military symbol standards and the ability to read aeronautical data directly from files in the AIXM format.

Since both versions share almost the same set of features, this document applies to both versions, unless otherwise noted.

The support for publishing nautical charts in Carmenta Server and Carmenta Server Core includes reading data on the S-57 format, optionally encrypted using S-63, and visualizing it according to the S-52 specification. The new release contains several improvements to published nautical chart services. 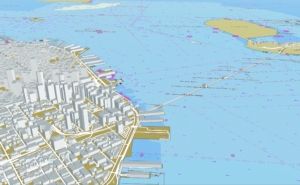 These problems are solved with the new release, with the possibility to configure the map configuration to adhere to the strict S-52 visualization if required.

Carmenta Server and Carmenta Server Core allows using S-63 encrypted data sources for nautical charts. In order to manage the encrypted data in a more practical way, both during development and testing but also in a deployed system, the new release contains a command line tool for management of S-63 User Permits and import of encrypted data. This applies both to initial data import as well as subsequent updates.

Carmenta Server Core: The command line tool may be run either on a developer system with the SDK installed, or in a running container on a production system.

A new RESTful API is introduced which allows system administrators to manage a Carmenta Server installation or a running Carmenta Server Core container. After authentication, a system administrator may retrieve and modify map server settings, retrieve a list of all published map services or map services available for publishing, publish or unpublish them as applicable as well as manage the tile store pre-populator service.

The documentation and samples that are included with the SDK versions of Carmenta Server and Carmenta Server Core have been extended in the new release, in order to aid developers and system administrators getting started quicker and easier with understanding different aspects of configuring and publishing advanced and complex map services. The samples section has been extended to contain a large number of samples to guide and illustrate how different tasks can be achieved.

Carmenta Server Core: Guides and samples are now included to explain how to setup and use networking with Docker Swarm, as well as Kubernetes.

The Vector Tiles interface has seen some improvements with the new release:

The following additional improvements have been made:

The new release has an improved and simplified packaging and installation of the SDK, which together with simplified license handling will make development and testing of advanced map services easier.

Other improvements include support for reading and publishing tiled raster maps as simplified XYZ / OpenStreetMap Slippy maps, greatly improved 3D Tiles performance for both 3D objects and detailed 3D models, and the addition of Kubernetes resource metrics for monitoring with Prometheus and Grafana.

The SDK installation is now packaged and downloaded as a single executable installation application (Windows) or run file (Linux). The installer will install the complete SDK package content:

Together with one or more Carmenta Server Core 2019.1 Docker images which are downloaded separately, this comprise the complete SDK environment for developing and testing web map services on a developer PC.

The Carmenta Server Core license handling has been simplified in the new release.

For deployment, a single Production license file will contain runtime license keys for both Windows- and Linux-based Carmenta Server Core containers. Deployment may be made using either or both base image types in parallel.

The XYZ-compatible links allow simpler retrieval of raster map tiles, with no need for Capabilities document being fetched and parsed, and where parameters such as reference system, scale levels etc. are fixed. The XYZ / Slippy Maps interface is compatible with for instance the OpenLayers OSM (Open Street Map) layer or the Carmenta Engine OgcWmtsLayer using a simple template tile URL.

The Cesium 3D Tiles service that was introduced in Carmenta Server core 2019.0 has undergone an overhaul to significantly improve its performance. For 3D Tiles based on 3D objects such as building polygons or more general objects, the performance is improved up to ten times compared to before. When used for detailed 3D Models based on Collada data or similar, the performance is improved up to four times compared to before.

Carmenta Server Core 2019.0 introduced a couple of Kubernetes probes to monitor the container state (readiness and liveness probes). The new version in addition contains support for Prometheus-compatible resource usage metrics, to monitor services and resource statistics. The monitoring can be used with Prometheus and Grafana dashboards for instance.

With Carmenta Server Core 2019.1 this simplified view now supports retrieval as a JSON document, to allow easier creation of objects in a client application. In addition, the JSON document now contains all metadata necessary for instantiating map layers for most service types, without the need to retrieve additional Capabilities documents in most cases.

The following additional improvements have been made in Carmenta Sever Core 2019.1:

The Vector Tiles support has been enhanced to allow integration with Carmenta Engine-based clients, allowing them to consume Vector Tiles services including styling with a minimum of configuration, as well as support for reading MBTiles files.

Carmenta Server 4.6 is the new minor update to Carmenta’s successful web map server for Windows Server deployment. For Docker container deployment, please refer to the new Carmenta Server Core product version. The new minor update contains the same scalable architecture as before based on the Carmenta Engine map server runtime, which provides high performance and reliability. The codebase has now been moved to the open-source frameworks .NET Core and ASP.NET Core. Furthermore, the 3D and Vector Tiles interfaces have had additional functionality added to them. 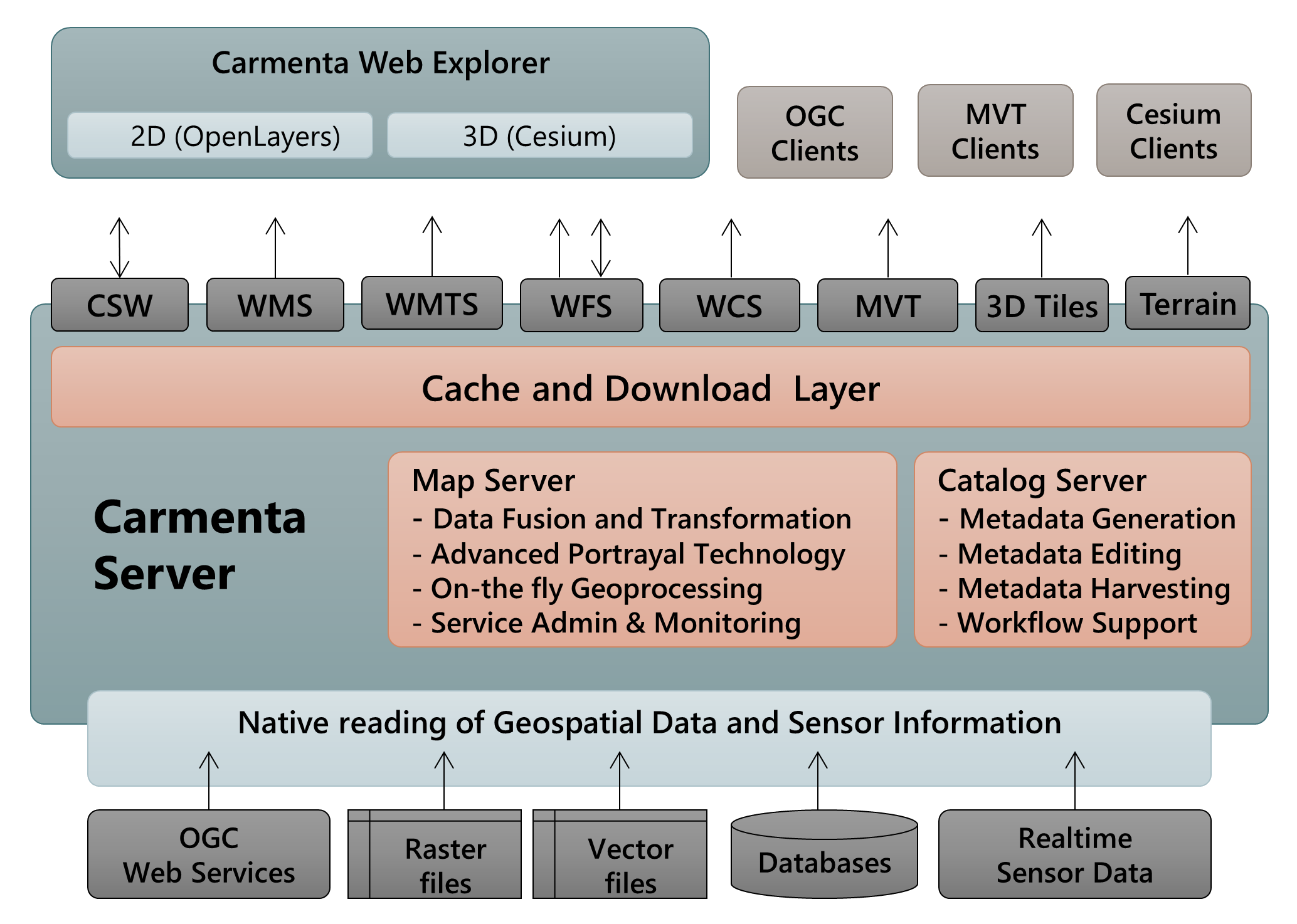 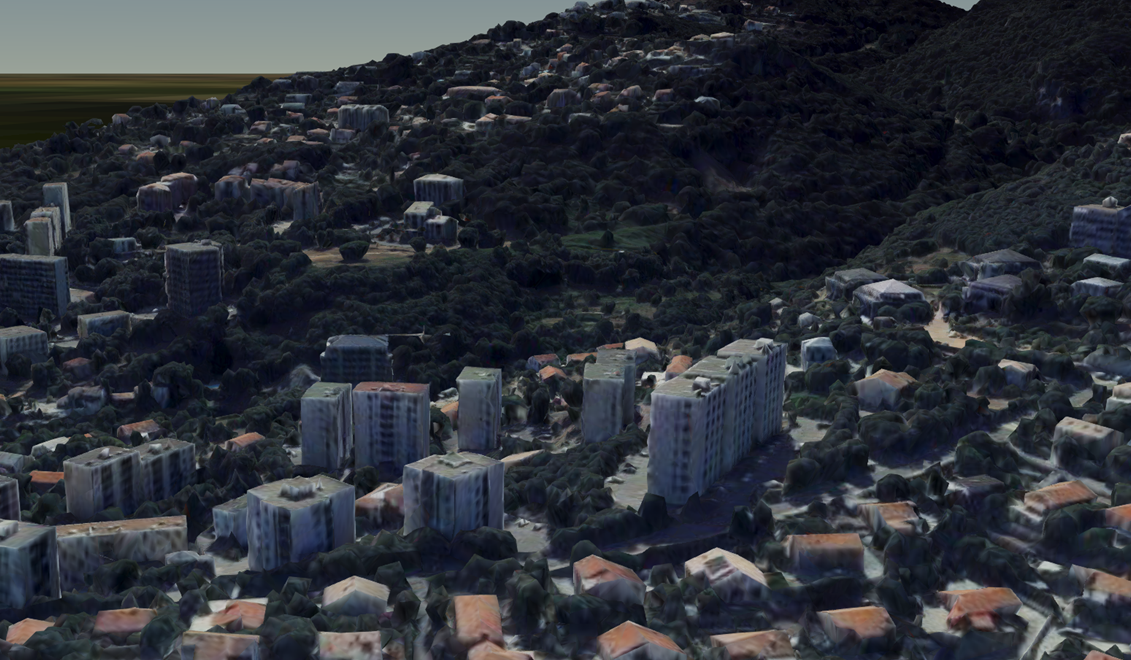 The support for 3D has been improved in Carmenta Server 4.6 through the following:

The documentation for Carmenta Server 4.6 is now delivered as a set of HTML files, allowing it to be viewed in any web browser. The HTML files can easily be searched for relevant keywords and definitions, and navigation in the pages is greatly simplified with the support for multiple browser tabs.

The following additional improvements have been made in Carmenta Sever 4.6: